A Building and Maintenance Company you can trust…

Cheapest is not the right solution 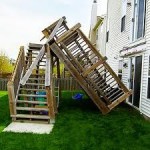 We live in a world where perceived value is at an all time low. If it is cheap then for some reason, people seem to think that this is the right solution.

I argue against this for so many reasons. If we look at recent news we can see that the purchase of inferior rail signalling systems has now not only delayed but also has halted works on the Moreton Bay Rail service being developed. If they had invested in the top quality signalling system then they would not be in this position. Yes safety comes first in this instance, but stupidity in procurement is something that can be avoided.

Working leaner, smarter and more efficiently can have the same cost saving effects as choosing and installing cheap, badly made products. But that depends on whom you choose to work with.

Now we are talking about a large-scale project here, but the same applies to small projects too… Think about it. You are about to install a new deck on your property, you’ve been saving for it for over a year or maybe you’ve decided to finance it. You’re all set to go and you then come across a supplier of some “Cheaper Timber” maybe it is not the exact same grade as the original quote you got from that licenced builder, plus you met a “Handy Man” who reckons its pretty easy to build your dream deck what you want and hey he can save you some money on fixings too because he gets his from overseas in bulk. You’re getting excited because you might be able to save yourself a few bucks here and what else could you spend that money on, maybe a weekend away.

So you get the handy man to install your cheap timber using poor quality fixings, but then the price starts to blow out half way through the job, then the Handy Man realises that he can only work on jobs up to the value of $3500inc GST and has to illegally sub contract out the work as Handy Men aren’t legally allowed to manage other tradespeople, so he starts to try and increase your costs by adding variations and excuses as to why the cost is now more.

The job finally gets completed, 2 months outside of the original scheduled completion date, and there is a mess everywhere and you’ve been stung for more than the original quote. You’re so relieved that the job is complete that you say to your wife, lets go away for the weekend. Whilst you are away a storm surge hits the area and your deck is the casualty.

It appears that that the “Handy Man” wasn’t so handy after all and tried to cut costs by making the beams spread over too far a distance, then the inferior fixings snapped under the pressure of the wind and because the wood wasn’t the best quality it split when the wind hit and the fixings failed.

Now you have to go through an Insurance claim and because your Handy Man wasn’t insured under QBCC you’re pretty much stuffed.

You wouldn’t use an unlicensed electrician to change your power points, you wouldn’t ask an unlicensed plumber to come and sort out plumbing needs, but general perception is that it is ok to get anyone to come in and handle the building and carpentry because the renovation shows tell you that it is easy to do. Its not and if you want the job done properly then it needs to be planned, designed, quoted properly and managed from start to finish. So, do your research, know who you are engaging, check your risks and check your and their insurances. Don’t get caught up in the cheapest is best game, because you will get burnt.

The moral of the story is: If you are going to get it done, get it done by a licenced tradesperson, who knows what they are doing, are insured and legally allowed to complete the works and refuses to use inferior materials to cut corners. www.garnishprojects.com.au